The Story Behind Boot Butler

The idea for Boot Butler came from experience transforming thousands of disorganized closets. The inventor, Andy Elstein, had been working as a closet design consultant for years at his family’s business, Creative Closets®, creating custom storage solutions for demanding clients.

One of the most common problems that he noticed when designing closets was that most people did not have a good solution for storing boots in a space-efficient way that also kept everything neat. For this reason, finding a solution to the problem of storing boots had been on his mind for years, but the solution eluded him… The idea for the first prototype of Boot Butler came to him after he returned from a hiking trip to Rocky Mountain National Park in Colorado.

When he returned home from his vacation, he opened up a web browser on his computer and saw a banner ad for hanging boot clips, similar to a pants hanger. The thought came to him that he could create something better. “Clip hangers can leave marks, don’t hold boots securely, and make poor use of closet rod space,” said Elstein. Realizing that all of the other products on the market had serious flaws, he set to work. His particular problem of not being able to recommend a good boot storage product to his clients bothered him so much that he felt like he had to make one himself.

As a hobby, he’d been sketching and making prototypes for years of various products. But Boot Butler was the first idea that he thought was good enough to take all the way into commercial production.

A second version of the prototype with boots on it.

Not everyone has ordinary closet problems, and Elstein’s experience solving unique issues relating to closets was good preparation for developing Boot Butler. In one case, he had to design a 6’ wide closet for a commercial airline pilot to hold a collection of over 3,000 vinyl records. The man had tried to buy every album that came out from around the time when he was in High School in the 1970s. The entire collection had to be accessible and organized. And LPs aren’t lightweight: the shelving had to be able to hold it.

In another, he created a closet to hold a collection of 1,500 neckties, 600 sets of suspenders, and 60 belts. There have also been the occasional closet-horrors familiar to fans of the reality TV show Hoarders.

“I was once shown into a closet that had a dead rat in a pool of blood in the middle of the floor,” said Elstein when asked about the most nightmarish closets that he’d seen in his consulting work. In another, a client had filled an entire 6’ closet full of empty plastic packages for some kind of nut snack that he was fond of. Elstein once had to call a junk hauler to empty out an entire garage for an, especially messy client.

The more common issue was one that you’re probably familiar with: clothing on the floor, boots were strewn about, and the only organization system being some cardboard boxes. Needing to come up with creative design solutions to all kinds of eccentric organization problems that real people have helped Elstein to make Boot Butler a more useful product.

Elstein identifies his comprehensive experience with other boot storage solutions as the main way that he was able to create a product that is superior on every level. All the product categories on the market that purport to be effective tended to be unsatisfying: and it isn’t just the boot clip hangers that cause issues. About his decision to develop his new product for sale, Elstein said: “Boot Butler was the first idea I had that I felt had all of the attributes necessary to justify my taking the risk of bringing it to market.”

While he expected to come up with an invention at some point in his career, he wasn’t sure if it would take years or decades. While it still took a few years for the product to be ready for sale, it didn’t take quite that long. Coming up with this solution required developing an understanding of all the other solutions already on the market.

In particular, Elstein compared his invention to others in terms of how much physical space that it could save while also mitigating the downsides typical to those solutions. Compared to hangers, standing racks, and upside-down boot racks that sit on the floor, Boot Butler takes up half the space in a typical closet. 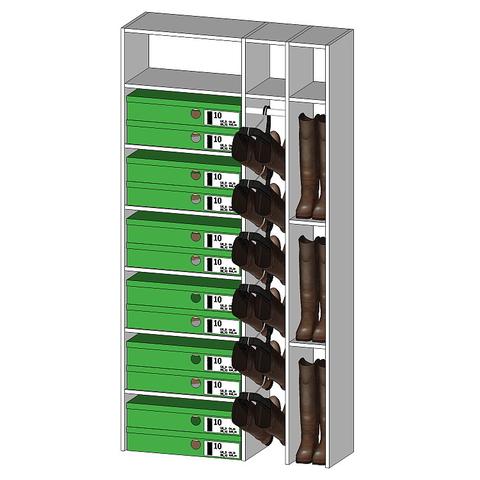 Boot storage in half the space. Image from an early presentation.

His experience in custom closets informed the product design process: by using the depth of the closet rather than just the height and width (which most storage solutions do), Boot Butler could make organization simpler for the average person. Thinking in terms of not just physical space but also how real people interact with their closets every day helped to make for a better invention.

Hard work, hands-on experience with the problem of boot storage, and multiple rounds of prototypes informed Elstein’s development of Boot Butler, with no massive corporate research department to back him up. If you’d like to read more about the invention of this product, you can look through the about page.