1. How did you come up with the idea of the Boot Butler?

My mom is The Closet Lady®. She’s the founder of Creative Closets®, a custom closet company. So I’ve been around well-designed and well-organized closets my entire life.

After graduating from college, I went to work for her, and designed custom storage systems for clients. I’ve designed a wide range of closets — anything from a closet that held a collection of 1,500 ties and 600 suspenders to one that held more than 3,000 vinyl records (all the albums were from the 1970s).

I began to notice just how many of my clients had numerous pairs of boots. And they would inevitably ask me what sort of solution I could provide for optimal boot organization. I was an expert closet designer by that time, but didn’t have that one perfect product that I could recommend. Of course, products existed: Anything from a boot shaper and a clip hanger to boot racks that held boots upside down. But what was fascinating was how few clients ended up using those products. Their boots would remain in a pile on the floor, or in the original boxes the boots came in.

So I began asking my clients why they weren’t using the products. Time and again, I’d hear the same reasons about the products: 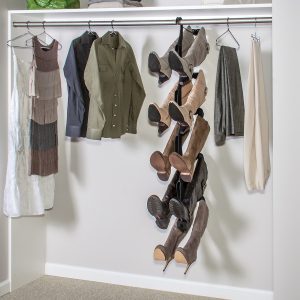 I realized that there was an opportunity for a product that didn’t yet exist. So I got to work. I kept the problem of organizing boots filed away in my working memory (I like to think of it as my brain’s RAM), and thought about it in conjunction with all the countless unrelated mechanical devices we come into contact with every day. From time to time, I’d come up with a specific idea that I’d explore but eventually rule out for one reason or another. This continued for about 4, 5 years.

I remember the precise moment that the idea for the Boot Butler came to me, because it was the day after I returned from a camping trip in Colorado’s Rocky Mountain National Park in June 2012. I sat down at my computer, and saw a banner ad for a boot hanger that used clip hangers (like a hanger for pants that uses clips).

I had seen these products before, but for some reason, that day, it struck me a bit differently. Part of that idea was good, I thought. Because hanging is such an efficient way of storing items in a closet. But clips don’t hold the boots very securely, can leave marks on the boot material, and aren’t very efficient, since you can only hang one pair of boots, leaving lots of unused space underneath. Further still, with the clip hangers, the orientation of the boots was very inefficient. What if I could find a way to utilize the depth of the closet to accommodate the length of the boots? (As a closet designer, I’ve learned to look at the spaces in a unique way: I look for spaces that AREN’T being utilized, because that’s where lots of opportunity lies. I also look at a closet as a puzzle, and the items stored in it as puzzle pieces. The goal is to figure out how to fit the pieces together in the most efficient, user-friendly and aesthetically pleasing way possible.)

And then I took my idea further: What if I could design a hanging boot rack that would also stack boots on top of each other? This way, the vertical closet space would be maximally utilized.

After some sketching and initial prototyping, I realized that I’d finally come up with a new and unique way to solve a problem that affects anyone who’s ever owned a pair of boots – and especially for people who own more than one pair.

I love problem-solving and prototyping, and to be able to put that into practical use has been indescribably rewarding.

2. What was the most important realization you had that allowed you to invent the Boot Butler? 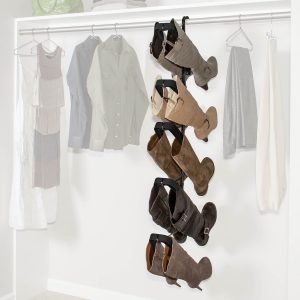 I started with the idea that a boot rack that hangs from a closet rod is a good idea because nearly every closet already has a rod, so it would be easy for most people to add onto their existing closet configuration. And that whatever product I designed had to be as near to friction-free to assemble and use as possible. As a professional closet designer, I can’t emphasize that enough: Because for everyday life, for things that you’re going to be using every single day, and sometimes multiple times a day, those products need to be very simple to use, very simple to assemble and reassemble. If not, they simply won’t get used.
From there, I reasoned, it would be most efficient to use the closet’s depth to hold the boots’ longest dimension — meaning the height of the boot. I also wanted to maximize the vertical space that is often wasted when using a clip style hanger, because so many closet rods hang much taller than even the longest of boots. So even if you’ve got one pair of boots on a clip hanger, that leaves so much space right underneath those boots that is simply being wasted. And most people have more than one pair of boots. So then what do you do with the other pairs? Hanging a bunch of clip hangers next to each other takes up a lot of space on the closet rod, while wasting even more space underneath.

3. How long did the process take?

About two and a half years, during which I was obsessed with solving all the problems I mentioned above. I dedicated myself to creating the most versatile and efficient boot storage system that was also super user-friendly.

I hijacked my wife’s boot collection and turned a room of our house into a laboratory of sorts. I experimented with various models, and committed pretty much every minute of the day I wasn’t working my day job, eating or sleeping to this product.
I did numerous rounds of testing, and also received and incorporated lots of feedback from family and friends, colleagues and folks in the closet storage industry. Two and a half years and lots of refinements and adjustments later, the Boot Butler was first offered for sale. Here, I have to give a shout-out to industrial designer, Grant Lindberg, who was an instrumental part of designing the final product.

Along the way, I also dealt with patent issues, researched the markets and audiences that would be into this product, figured out manufacturability — everything that goes into launching a new product.

4. What’s been the most rewarding part of this entire process for you?

As I mentioned, I love problem-solving. I’m a huge geek when it comes to figuring out how things like engineering, manufacturing, marketing and merchandising all come together. The learning aspect has, I think, been the most fun, and also the most challenging and rewarding. I want to keep learning and growing. Now that the product is out, I’m constantly thinking about how to improve it, market it better, and how to bring it to more and more boot owners.

5. What’s your biggest hope when it comes to how the Boot Butler will impact people’s closets?
First of all, while I felt that I had come up with a great idea that would be well-received, I had no idea just how enthusiastic people would be about it! And because of that consistent positive feedback, I realize how much a product like that was and is needed. So many customers tell me that they can’t believe nothing like this existed previously: “It makes so much sense!” I hear over and over again (not that I ever get tired of hearing it).

As someone who’s been around the closet industry my entire life, I know how much of an impact good organization has on people’s life and well-being, so seeing my product contributing to that is extremely rewarding.